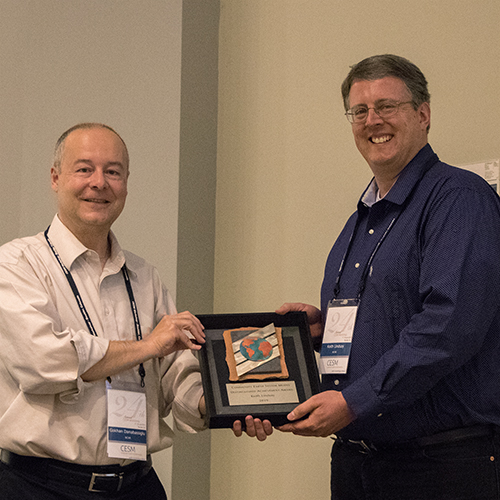 Keith was nominated for the 2019 CESM Distinguished Achievement Award for his sustained scientific and technical contributions to CESM. Keith has been THE central figure in implementing an interactive carbon cycle in CESM, thus facilitating the transition from a physical climate model to an Earth System model. He has served as the co-chair of the Biogeochemistry working group for many years, acting as a liaison and coordinator between the marine, terrestrial and atmospheric scientist involved in carbon cycle science with CESM.

There is likely no single person in the CESM project with such a comprehensive understanding of the model in its totality. Through his own original research in fast solver methods, Keith has enabled science with CESM that is inaccessible with any other Earth system model, and made possible experiments that would be otherwise cost-prohibitive. This is truly groundbreaking work which he continues to extend to broaden its applicability to more complex configurations of the model and to enhance the ease of use for the community. 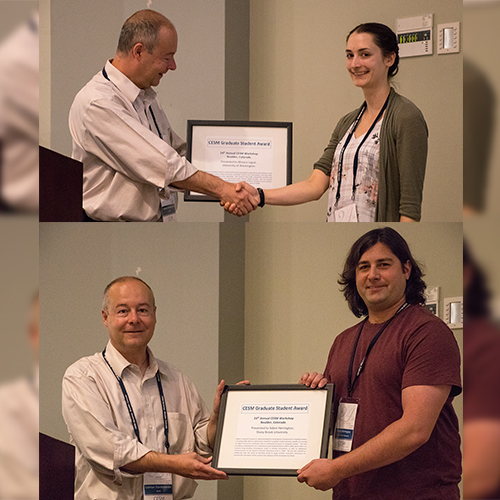 Marysa is a Ph.D. candidate in Atmospheric Sciences at the University of Washington. Marysa’s research seeks to understand how the atmosphere responds to perturbations in the land surface, what surface processes contribute most to the atmosphere, and how land-atmosphere coupling varies regionally. A land surface model such as the Community Land Model (CLM) does not readily facilitate the necessary model analyses. Many critical land surface processes that affect the atmosphere (e.g., surface albedo, evaporative resistance) are the modeled outcome of complex parameterizations. They cannot be easily prescribed or changed to specified values so as to assess the atmospheric response to a known surface perturbation. To solve this problem, Marysa developed a simplified land surface model (SLIM). Her model provides a computationally efficient yet scientifically robust framework to analyze land–atmosphere interactions. SLIM will be made available to the CESM community.

Adam is a Ph.D. student in the School of Marine and Atmospheric Sciences at Stony Brook University (SBU). He spent some time at NCAR through an Advanced Study Program Graduate Student Fellowship working with Peter Lauritzen. Adam’s research focuses on understanding the convergence characteristics of global models, including CAM, which is particularly important as global models become capable of running at higher horizontal resolutions due to continued increases in computer power. Adam co-developed (with Peter) a new physics grid implementation within CAM, which offers to improve long-standing convergence issues in climate simulations, as well as additional enhancements to the Spectral Element dynamical core in CAM. Adam is also collaborating with scientists in the LIWG to apply variable resolution techniques to improve simulations of the surface mass balance of the Greenland Ice Sheet.

Back to awards page